SQL Server 2016 introduced a new query plan operator that mostly flew under the radar: foreign key references check. It doesn’t even show up in the list of operators:

I’m not a foreign key guy, but a new operator is interesting enough for me to poke around. It’s described as the referential integrity operator in most of the docs so I’ll also describe it that way here for the rest of the post.

What Problem Does This Operator Solve?

What happens if we need to delete a row from the parent table? SQL Server has to check that none of the children table values match the value we want to delete. The check can be seen in the execution plan for the delete query:

In this example, we have two unindexed columns in the child table. The query optimizer does a table scan for each referencing row. CHILD_TABLE_BIG is currently empty so this isn’t a problem.

What would happen if a parent table was referenced by hundreds of child tables, such as for a date dimension table? Deleting or updating a row in the parent table would create a query plan with at least one join per incoming foreign key reference. Creating a query plan for that statement is equivalent to creating a query plan for a query containing hundreds or even thousands of joins. That query plan could take a long time to compile or could even time out. For example, I created a simple query with 2500 joins and it still hadn’t finished compiling after 15 minutes. That’s why I assume a table is limited to 253 incoming foreign key references in SQL Server 2014.

That restriction won’t be hit often but could be pretty inconvenient to work around. The referential integrity operator introduced with compatibility level 130 raises the limit from 253 to 10000. All of the joins are collapsed into a single operator which can reduce compile time and avoid errors. From a blog post by Gjorgji Gjeorgjievski:

SQL Server 2016 introduces a new Referential Integrity Operator (under compatibility level 130) that increases the limit on the number of other tables with foreign key references to a primary or unique key of a given table (incoming references), from 253 to 10,000. The new query execution operator does the referential integrity checks in place, by comparing the modified row to the rows in the referencing tables, to verify that the modification will not break the referential integrity. This results in much lower compilation times for such plans and comparable execution times.

Many of SQL Server’s query plan operators are designed to be small in scope and reusable for lots of different purposes. For example, when STRING_AGG() was released in SQL Server 2017 it wasn’t necessary for Microsoft to create a new query plan operator. That function was implemented with a combination of existing operators. It’s unfortunate that the referential integrity operator is an “all-in-one” operator. Perhaps this was the only practical way to increase the number of incoming references.

Running Out Of Stack Space

First I’ll create tables similar to before, but CHILD_TABLE_BIG will have 253 references to FK_PARENT_TABLE. The code to create those tables is too tedious and long for this blog post, and that’s saying something. After creating the tables, the next step is to set the compatibility level to 120:

Now I try to create one more incoming reference:

Referential Integrity Operator to the Rescue

Now I’ll reset the compatibility level to 140 and reset all of the tables. Now there are only 253 incoming references to the parent table.

The query plan is a long one:

Looks like we don’t get the new operator by default with just 253 incoming references. Let’s add one more reference:

This operator is made available through the RefIntegrityMaintainer optimizer rule. If I disable that optimizer rule with 254 incoming references I get the usual error:

Msg 8622, Level 16, State 1, Line 278
Query processor could not produce a query plan because of the hints defined in this query. Resubmit the query without specifying any hints and without using SET FORCEPLAN.

It is possible to force a plan without the new operator (more on that later). It just isn’t as easy as disabling the new optimizer rule.

Is it possible to get this operator with 253 or fewer incoming references? Yes: 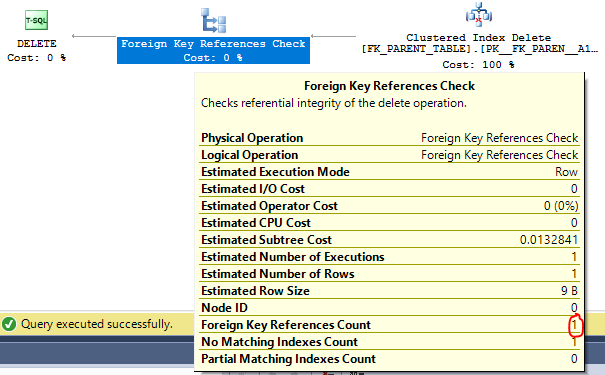 The foreign key references check operator is used here with just one incoming reference. This was done via a USE HINT query hint: